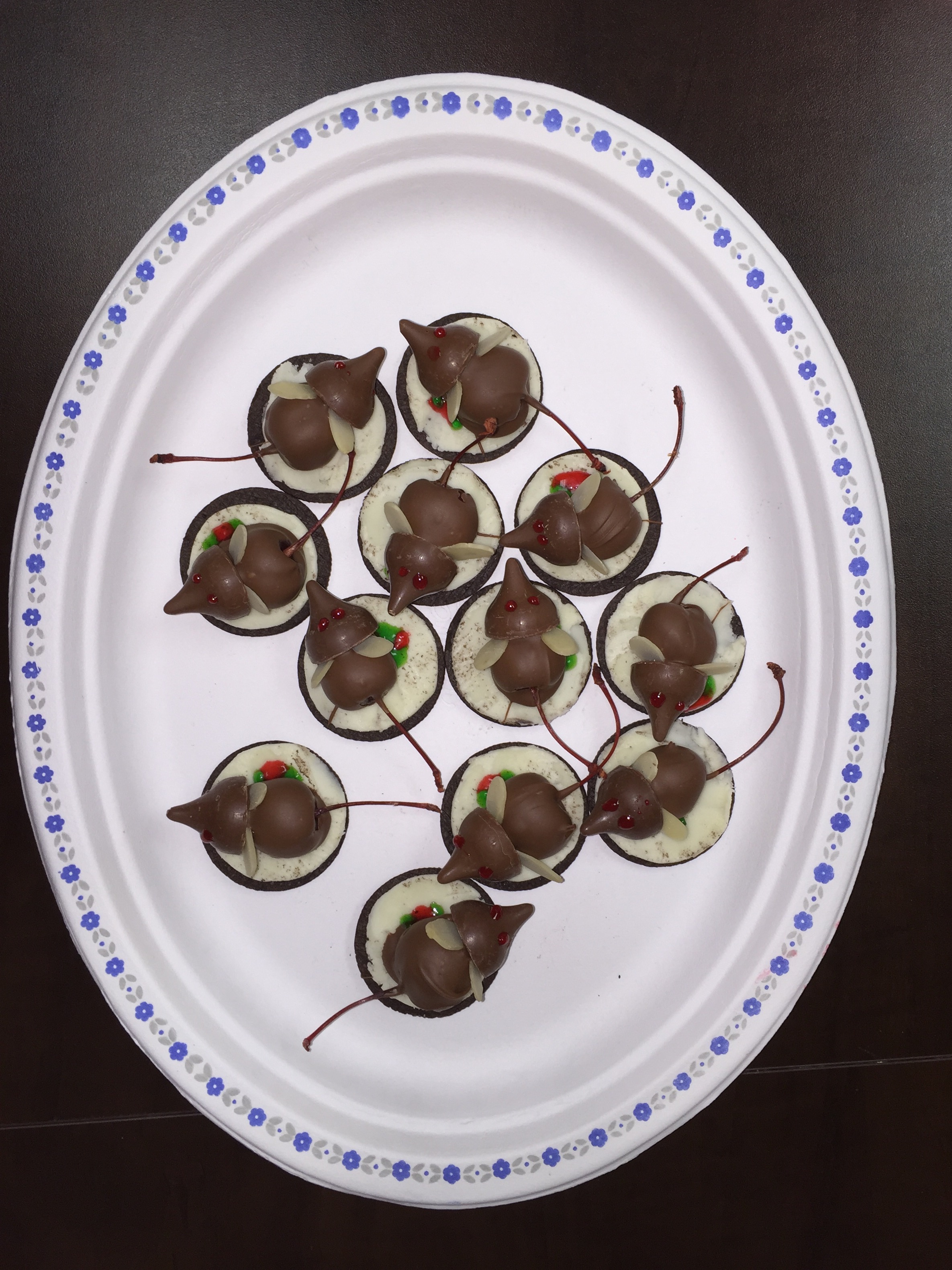 We are very lucky to receive so many yummy treats in our office over the holiday season. These are today’s favourite! 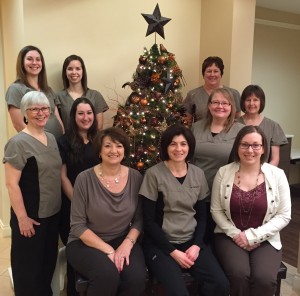 Best wishes for a happy, healthy holiday season and all the best for 2015.

Drs. Corbett and Bales sponsored Alex, the only Manitoban, who won a place to compete in the World Juniors. Here are some photos of her trip. 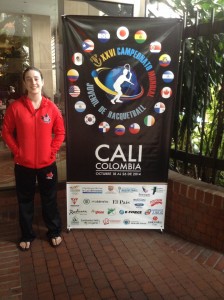 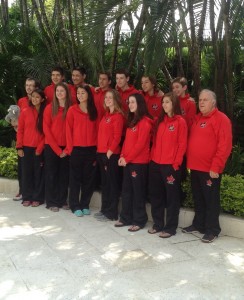 Halloween at the Office 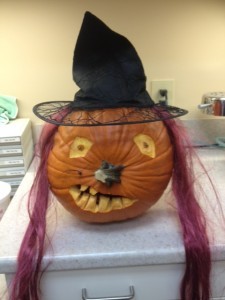 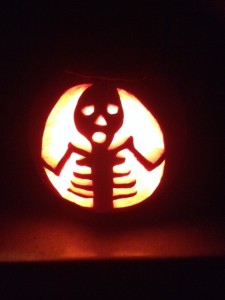 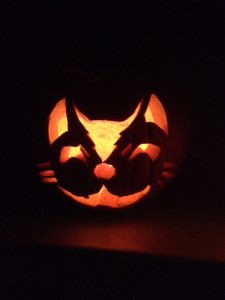 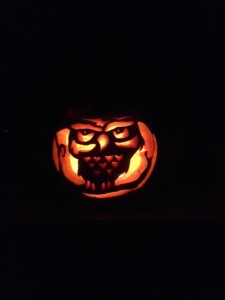 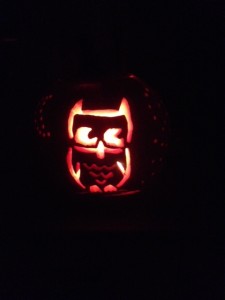 Alex off to Columbia!

Drs. Corbett and Bales have gladly sponsored Alex, who is a member of the Brandon Racquetball Association, and has earned a spot on the Canadian Junior National Team. She is off to play in the Junior Word Championship in Columbia as the only member of the Canadian Team from Manitoba!! We wish her luck! 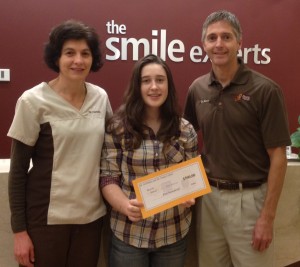 Drs. Corbett and Bales sponsored a Manitoba athlete at the Special Olympics Canada Summer Games. Here is Daryn with his coach, Karlie and his winning Silver Medal for baseball. 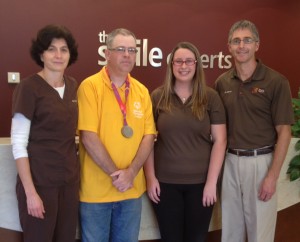 Today was the “Pass the Pie” fundraiser for Big Brothers Big Sisters.

We had a lot of fun reuntitledceiving pies and paying to send them on to another recipient. April took one for our office! 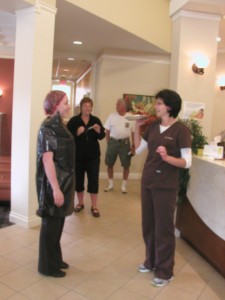 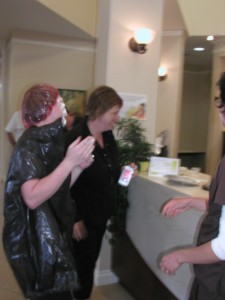 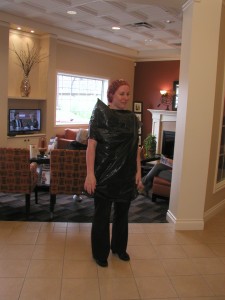 For those that don’t know how this fundraiser works:

Purchase a pie for $5.00, tell them who to send it to and one of the volunteers will do the dirty work!

The recipient as three options:

All proceeds go to Big Brothers Big Sisters of Brandon. This is an annual fundraiser so get involved and remember it for next year!!

Update: We raised $258.15 from our Bake Sale!! Thanks to all our patients, friends and neighbours for supporting this worthy cause! A great big thank you to all our team members for baking all the goodies! A team effort all round!

We are celebrating the Canadian Red Cross Day of Pink today, April 9, 2014. The Canadian Red Cross belives that every child should be treated with respect. This means they work hard to prevent bullying every day – through education. We are having a fundraising Bake Sale with 100% of the donations going to support the Red Cross Stop Bullying Campaign. 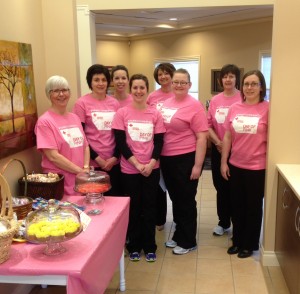 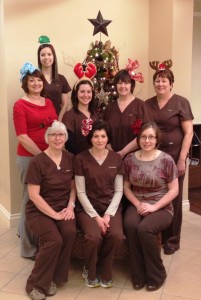 As the holidays season draws near, we would like to take this opportunity to wish you and your family a happy and healthy holiday season

May 2014 bestow upon you and yours peace and prosperity. Thanks you for entrusting us with your care. We look forward to seeing you in 2014

Every year Drs. Corbett and Bales sponsor the Manitoba Barrel Racing Association. This year they sponsored the Fast Time Awards. Pictured below are the three winners. 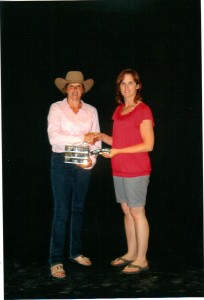 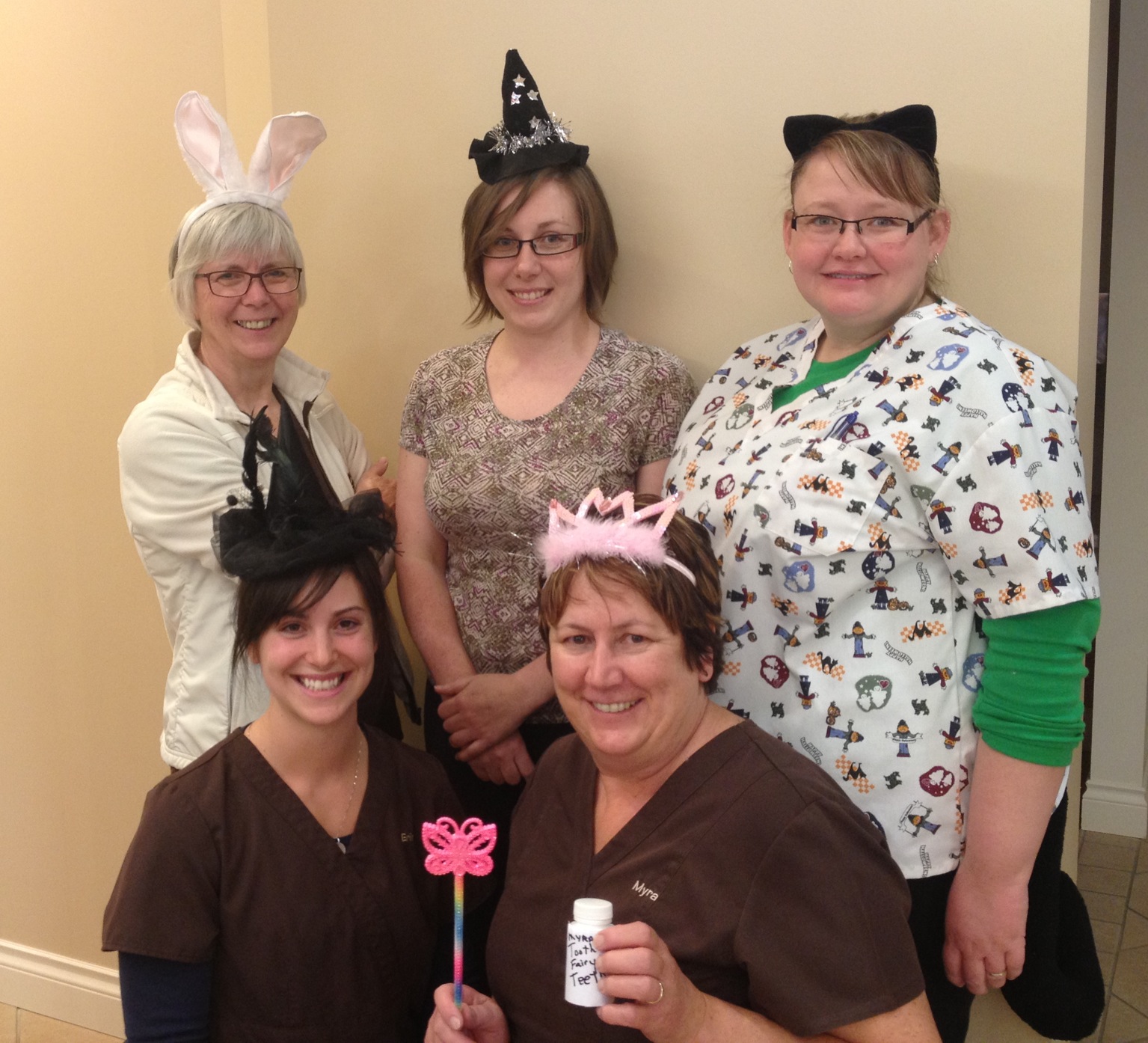 On June 14, 2013 a team from our office “Smiles for the Cure”. We raised just over $4000 for the Canadian Cancer Society towards their goal of finding a cure and were awarded “The Top Business Team.” 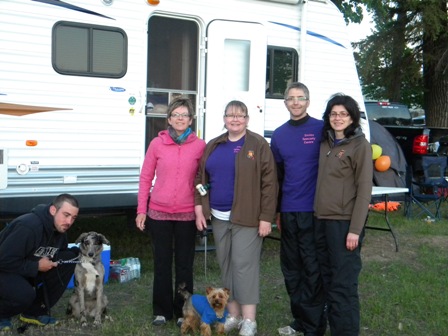 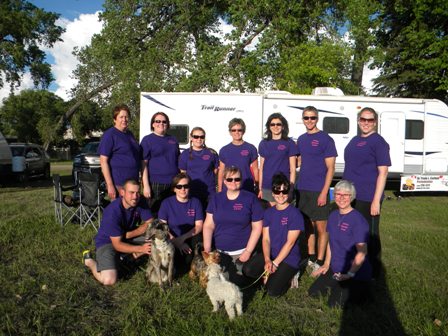 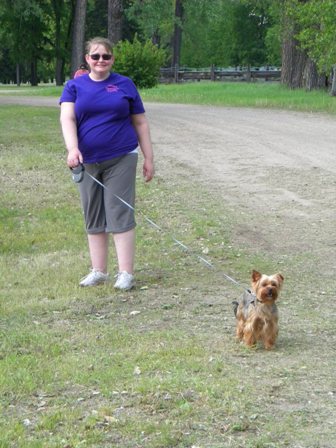 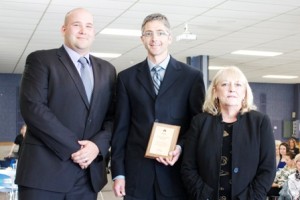 annual luncheon, which recognizes the many who have helped advance higher education at the university in the past year. Dick McDonald was named Outstanding Volunteer Fundraiser and Dr. Jeff Bales received the BU Honorary Trustee Apex Award. McDonald, who received both his arts and education degrees from BU, is a retired financial adviser, former school teacher and military officer. He has served in a number of volunteer capacities with the university, including as a member of the fundraising team that raised more than $8 million for BU between 2004 and 2007; as a board member of the Brandon University Foundation and current volunteer for the BUILD Campaign. He and his wife Verda have also
provided generous financial support to Brandon University.

Bales is a partner in Smiles Specialty Centre with his wife, Dr. Trudy Corbett. His involvement with the Brandon University Foundation has been considerable, including as a member of the board from 2004 until 2011, during which he was active in raising more than $8 million for the university; foundation President in 200P and 2008. In addition, Bales and Corbett have been ongoing, gracious supporters of the university. BU Foundation president Nathan Peto said both men are well-deserving of the awards. “Dick is one of the most devoted university fundraisers that I have ever met,”  he said. “Jeff’s commitment is also second-tonone. The foundation would be hard-pressed to find two more worthy recipients.” More than 150 new and existing Order of the Sheaf members were recognized for their contributions to BU during Friday’s luncheon in the university’s main dining hall.
» Submitted 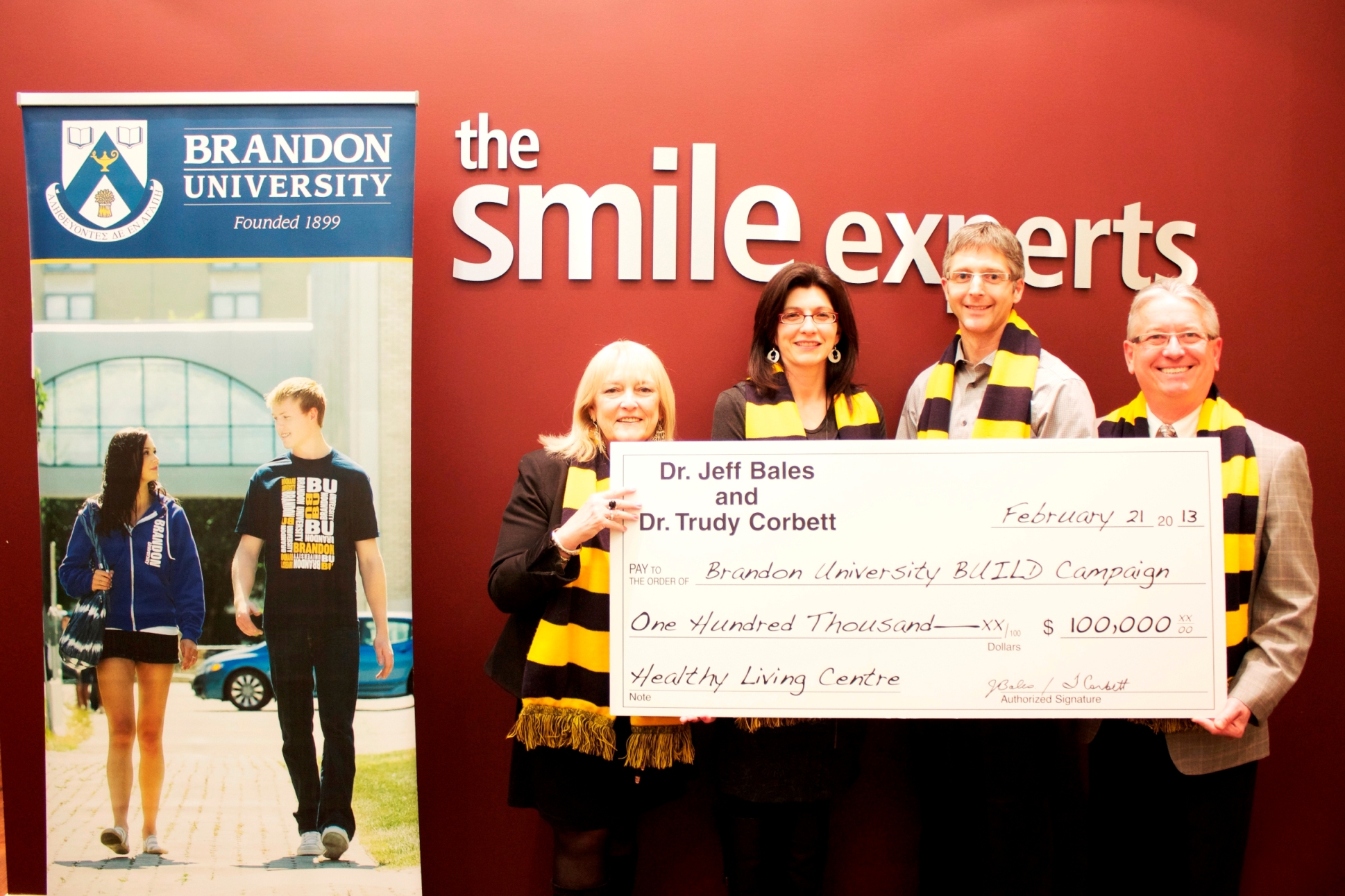 There were plenty of smiles around the Brandon University campus thanks to a hefty donation to the new Healthy Living Centre.

Periodontist Trudy Corbett and orthodontist Jeff Bales, partners in Smiles Specialty Centre, have given $100,000 towards the completion of the $24.3-million project, which opened to the public in January with construction to be finished this spring. “Health and wellness have always been a big part of our lives, and we are big believers in post secondary education, so this donation is a perfect fit for us in terms of giving back to the community,” Corbett said.
BU president Deborah Poff said the husband and wife team are longtime supporters of the university. “In addition to their financial contributions,” Poff said. “I want to thank Jeff for his many years of service on the BU Foundation Board, including a term as chair. Both Jeff and Trudy are true community builders.” BU is important for Brandon, Bales said. “We are not a large city, so having a university is a real feather in our cap, a real asset, especially since the Healthy Living Centre is available and accessible to the community at-large.” 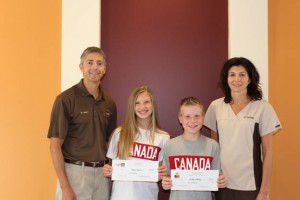 Kyra Lavoie and Colby Pilling, from Steppin’ Time Dance Studio, would like to thank Dr. Trudy Corbett and Dr. Jeff Bales of Smiles Specialty Centre on Richmond Avenue in Brandon for their generous sponsorship. Their donation will support Kyra and Colby as they travel to Riesa, Germany this December to compete as members of the Canadian National Tap Dance Team. We are grateful to Dr. Bales and Dr. Corbett for supporting Kyra and Colby in their journey. 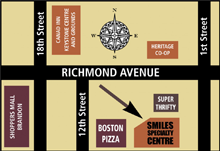